Remember that iconic scene where Mr. White meets Saul Goodman for the very first time? Bob Odenkirk did such an amazing job as the smooth-talking, suave lawyer that the audiences felt like they were there in that moment in person.

After the resounding failure of the final season of Game of Thrones, hit AMC show Breaking Bad has solidified its name as the best TV show of all time. Every website from IMDb to Rotten Tomatoes has ranked it as high as the scale would go.

Breaking Bad’s success was in no small part due to its large cast of colorful characters, and Saul was up there with the best. Bob Odenkirk revived his acting career with this iconic role by doing justice to his part throughout the five seasons, but acting is not even Odenkirk’s second best talent.

Let’s have a look at some facts you did not know (and could not have guessed) about Bob Odenkirk.

Facts about His TV Career

Between 1980 and 1990, Odenkirk worked as a writer for Saturday Night Live and The Ben Stiller Show before he embodied the iconic character, Saul Goodman. He did a stellar job as well; from 1987 to 1991, he won an Emmy for his writing for SNL, he later received another for Ben Stiller. It is widely appreciated that Odenkirk created the most memorable characters for SNL when he was a part of the writing team.

2. He was nominated multiple times for his performance in Better Call Saul

For the first and second season of Better Call Saul, Odenkirk was nominated for best performance by a lead actor in a comedy show. In addition, he was also nominated in the same capacity at the Golden Globes and the Screen Actors’ Guild Award.

This year, in an interesting twist, AMC is sending out burner phones to TV academy members so they can vote for their favorite characters on the show with Bob Odenkirk leading the list.

3. Wrote for the Dennis Miller Show

Odenkirk also worked as a writer for The Dennis Miller show, a weekly talk show that aired 215 episodes from the mid-90s to the early 2000s. While he was part of the team, the show received five Emmy awards and was nominated for 11 in all!

4. He almost starred as Michael Scott in The Office!

When NBC decided to remake The Office in an American version, their first choice to play the rude and awkward boss Michael Scott was Paul Giamatti. After his refusal, the directors approached Bob Odenkirk, but Steve Carell eventually got the job. After multiple Emmy wins for Carrel’s performance, we are actually not sorry about that.

5. …but he settled for a guest role in the final season

Odenkirk showed up in the final season of The Office. The episode’s plot shows Pam going in for an interview with an employer, Bob Odenkirk, who acts eerily similar to her old boss, Michael Scott. 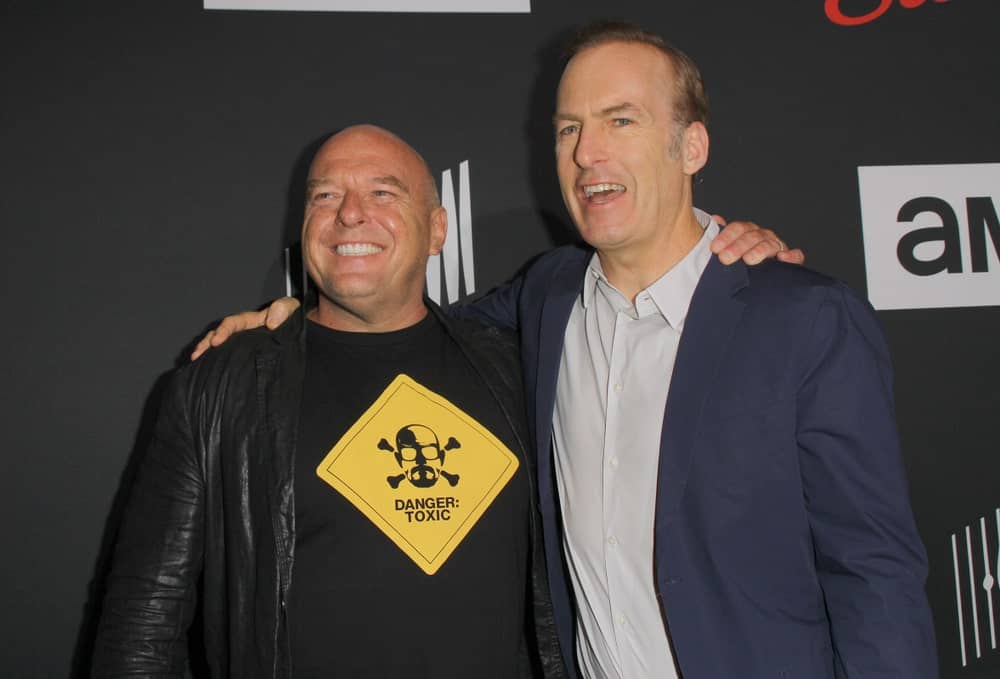 When most of us were busy watching the binge-worthy drama, Bob Odenkirk decided he did not want to stray far from his character by watching him on screen and knowing things Saul Goodman is not supposed to know. In fact, his exact words were that he does not want to ‘know what the f*** is going on.’

We could call it a kind of method acting if you think about it, although he did admit later it was because he was rudely interrupted by his kids on his first attempt of watching.

7. Did minor film and TV roles

The actor’s first roles were minor, in films such as The Cable Guy, Can’t Stop Dancing, Monkeybone, and Wayne’s World 2. He also did small cameos and feature roles in several popular comedic TV shows such as The Office, How I Met Your Mother, Everybody Loves Raymond, Arrested Development, and Curb Your Enthusiasm among many more.

After Breaking Bad’s huge success, Odenkirk started getting bigger roles; one of the most notable accomplishments was being cast in Steven Spielberg’s political thriller The Post, and another of his films titled The Papers that also featured Tom Hanks and his long-term friend David Cross.

Bob Odenkirk was the director of Let’s Go to Prison, a 2006 comedy film that features Dax Shepherd, Will Arnett, and Chi McBride. The movie earned US$4.6 million in gross revenue and a sad 15% all-critics score on Rotten Tomatoes. It was the second theatrically released film that Odenkirk directed, the first being The Brothers Solomon.

10. He has a history with Ben Stiller and Michael McKean

Odenkirk was friends with Ben Stiller even before he entered the TV industry, which cleared his path to become one of the main writers of the show. Another one of his friends and inspirations is Michael McKean, who appears in Better Call Saul as Jimmy’s older brother, Chuck, who is a far more successful lawyer.

Bob Odenkirk as a Comedian

The simple comedy of the Monty Python franchise first inspired a young Odenkirk to become a comedian. He told The Guardian that it ‘became his religion’ when he was about 10 years old and that it helped him through very tough times by speaking to him. He decided that he wanted to tell the world his vision through sketch comedy as well.

12. His first meeting with David Cross did not go well

David Cross has been Bob Odenkirk’s close friend and they have worked on several projects together over the years. Their first meeting, however, was nothing short of embarrassing. David Cross was working as a comedian in LA when one boring afternoon he asked fellow stand-up artist Janeane Garofalo if she knew anyone who played basketball. Garofalo took him to Odenkirk’s house, who was an SNL writer at the time and introduced them before asking if he wanted to play. Odenkirk said no.

13. He co-created a sketch comedy program

With David Cross as his partner and co-writer, Odenkirk wrote a comedy show titled Mr. Show with Bob and David that aired on HBO from 1995 to 1998. The show was a sketch comedy that was performed in front of a live audience. Other comedians often appeared as cast members and writers, including Sarah Silverman and Jack Black.

14. He got in trouble for using his grandfather’s picture in a joke

In one episode of Mr. Show with Bob and David, a picture of an old man was required. Odenkirk decided it would be okay to use a picture of his dead grandfather in the show as the butt of the joke, and as it turned out, some of his family members were very upset about it.

15. Odenkirk’s brother is a writer on The Simpsons

Bob Odenkirk’s younger brother, Bill Odenkirk, is a co-executive producer on the animated TV series The Simpsons. Bill was also on the writing team of Mr. Show and worked on the film sci-fi series Futurama.

After three years of college, Odenkirk decided to try writing and improv in Chicago

17. Parents divorced due to his father’s alcoholism

Bob had a difficult childhood dealing with his parents’ divorce when he was only 3 years old. He revealed in an interview that his dad ‘drank booze for a living’ and his mother was the one who worked hard to keep them fed and alive.

Disillusioned by his father’s debilitating alcoholism, Odenkirk decided at a very young age that he wants to stay away as far away from alcohol as possible. He does not drink hard liquor, whether in parties or social gatherings.

19. He is the second oldest of seven siblings

He says it was wonderful having so many sisters and brothers and that he loved being in charge of his own little world.

The couple has been married for 15 years and Naomi admits to having had a crush on Odenkirk a year and a half before actually meeting him. She spoke to Playboy magazine about it and said that he seemed ‘disinterested’ but when they actually met, they immediately hit it off. The couple now has two children aged 19 and 21 respectively.

21. Breaking Bad writers used to joke about making a spin-off

The writers had so much fun putting words in Saul Goodman’s mouth that it became a running joke that they would create a spin-off featuring the character as a lead. When a particularly good line came up they would say “you know when we’re doing the Saul Goodman show, we’ll be able to…”

Well, they were not too far off!

22. It gives subtle nods to its predecessor

There are so many Easter eggs hidden in Better Call Saul that the director’s eye for detail has to be commended. While some references are for novelty only, others add deeper meaning to the events of the forerunning show. There are several instances where we see Saul Goodman learning his cheap tricks from other people in the prequel.

To emphasize that the two shows are part of the same universe and the same franchise, Better Call Saul even subtly incorporates the Breaking Bad theme song!

23. The visuals of the show are inspired by Stanley Kubrick

While Breaking Bad was shot in 35mm with a grainy texture, Better Call Saul uses 4k digital technology. This gives the picture crispness and a cinematic effect that is reminiscent of Stanley Kubrick’s cinematic style.

The director, Vince Gilligan, admitted that he uses Kubrick’s rule when he tries to always make the first image the most striking this a viewer would see. He also uses music cues in the same way.

Anyone who has taken an interest in the corrupt ways of Saul Goodman has taken much pleasure out of the performance too. The way he played the character, with so much intensity and sincerity, contributed greatly in making Breaking Bad arguably the greatest show ever made in the history of television; with Better Call Saul following as a close second.

As proven by his various awards and accolades, Odenkirk is a brilliant writer and comedian too, and if you are a fan, you should check out instances of his hilarity in many YouTube videos.

However, if you have not paid close attention to the actor, director, comedian, and writer in the past, now is your time to acquaint yourself with his talent.